Send us information about beer we don't have in our database. [more] 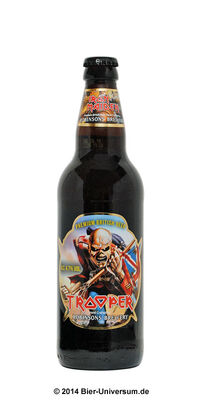 Description according to label:

Onward, onward rode the 600 ... The charge of the Light Brigade, which inspired the Iron Maiden song "the Trooper", took place at the battle of Balaclava (1854) during the Crimean War when 600 British cavalry courageously charged the massed Russian artillery. This gallant but foolhardy assault resulted in a massive loss of life and came about due to a misunderstanding of an order given by the command officer, Lord Raglan.

Trooper is a premium British beer inspired by Iron Maiden and handcrafted at Robinsons brewery. Being a real ale enthusiast, vocalist Bruce Dickinson has developed a beer which has true depth of character. Malt flavours and citric notes from a unique blend of Bobec, Goldings and Cascade hops dominate this deep golden ale with a subtile hint of lemon.


>>> Details about this company

>>> Details about this company